Katelyn Must - The Invincibles Tour Ambassador 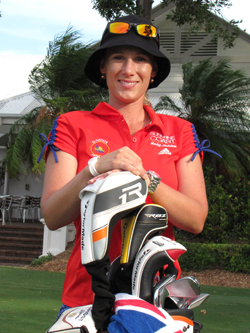 Whilst growing up on the Sunshine Coast, I knew pretty early in the peace that whatever my future was to hold “it had to be associated with Golf”. Although I tried many sports in my early days, I just knew that golf was going to play an important part in my life!

In those early days, I was lucky enough to be recruited as one of the original members of The Invincibles Tour, which I am happy with because it not only exposed me to some of the best times of my life, it also gave me a fantastic introduction to the game and life in general. I learnt so many invaluable life and people skills along the way; it wasn’t just about hitting a ball or sinking those long putts.

I’ll never forget as a 15 year old coming down the 18th at Hyatt Regency Coolum (as it was known in those days) in the lead for The Invincibles Gold Cup of Cups Championship “one of The Invincibles Major Events” where I only had to make bogey for the win, but instead I played a very ordinary approach shot, made a bad decision at the water’s edge which lead to me losing the Championship.

As I recall, I was very disappointed at the time and to say it didn’t matter would be wrong, but in the true philosophy of The Invincibles Tour, which was to play hard, give it your best shot and if it was your day “great” if not, move on and make the most out of competing on some of Australia’s most incredible golf courses whilst enjoying the company of family and friends and that’s a philosophy that I have taken with me into my professional career and live by on a daily basis. One of my greatest thrills and highlights of my time on The Invincibles Tour was being presented with their Masters Jacket and Trophy by Toini Norman (Greg Normans mum pictured below) after winning The Invincibles 2007 IGA Sunshine Coast Junior Masters Championship, which is a very prestigious seventy-two-hole Championship hosted by Twin Waters, Pelican Waters, Peregian Springs and Noosa Springs Golf Resorts which to this day is still one of the greatest highlights of my career!

When my handicap dropped and it was inevitable that I would compete in some serious State and National events and represent Queensland, I always looked forward to coming home to compete at Invincibles events as they were fun events where I could come home to recharge my batteries.

Now as a professional golfer, so much of what I learnt as an Invincibles member has stayed with me. Like how to speak and behave in public and how to look after my sponsors, not to mention the etiquette and traditions of the game which I still uphold no matter where I am in the world.

If golf is a “game for life”, The Invincibles Tour has taught me some serious life lessons on how to be a great sport, not just a good one. How to behave when things get tough and how to be gracious and thankful even when things don’t go quite to plan “after all it’s only a game” and there’s always tomorrow and another opportunity to set the records straight.

After completing my traineeship and embarking on a professional career, it is now time for me to give something back.

In between my professional events and commitments, I look forward to spending time mentoring our up-and-coming junior golfers of the future with The Invincible Tour. I am truly looking forward to using my PGA credentials as both a teaching and touring Professional to encourage and mentor the next generation of young golfers.

Please make sure you come and introduce yourself if I’m at your next event, as I would love to talk to you about your golf and get to know you all.

Let’s play golf and have some real fun!