The Invincibles Tour would like to pass on their thanks and appreciation to Pelican Waters Golf Club, particularly Andrew Kenny (Manager) and his great team led by Jacob Harris (Golf Operations Manager) and Michelle Hurd (Events & Functions Manager) for their fantastic support and for making everyone feel welcome.

Their course and facilities were in magnificent condition which was an absolute treat for everyone that took up the challenge to contest their 2 Day Easter Classic. 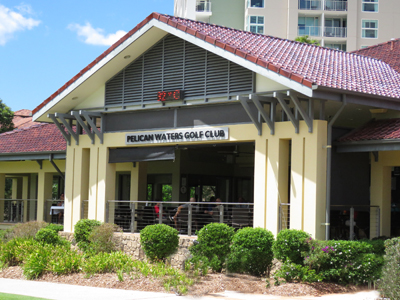 “Pelican Waters Golf Club has intelligently integrated a 6,289m championship golf course with the existing natural landscape to deliver a challenging golfing terrain. With its enviable backdrop of the majestic Glasshouse Mountains and nestled within the heart of the master planned community of Pelican Waters, where our club offers the golfing enthusiast one of the most unique and rewarding golf courses on the Sunshine Coast.”

If you haven’t had the opportunity or taken the time to visit the beautifully presented Pelican Waters Golf Club that’s situated a comfortable sixty - minute drive North of Brisbane, then you are missing something very special. The Pelican Waters Golf Club, is where fine dining, a great golfing experienced and nature come together on the very challenging Greg Norman Designed Golf Course. 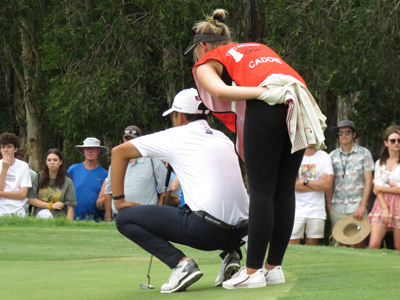 To have the Queensland Open back on the Sunshine Coast was a great thrill. To have it in our own back yard for the first time since Ian Baker-Finch (Patron to The Invincibles Tour) won it back in 1990 at the Hyatt Regency Coolum, with scores of 66,67,67,71= 271, was a thrill in itself, but to witness more than twenty-six of our past and present Invincibles members participating in the Championship, was a…….

Major buzz that gave all our members a huge boost and at the same time sent out a powerful message to all our juniors, that dreams do come true, if you are prepared to commit.

All it takes is a passion for the game, being able to focus on what’s important and a desire to do what it takes to achieve your dreams, and that was no more apparent when witnessing our young men and women contesting the Queensland Open, from the 20th to the 23rd of February.

Particularly for Sarah Wilson (caddie in main photo) who was the first girl to qualify through the qualifying rounds at her home club, Pelican Waters.

“Becky Kaye did qualify via the Queensland Development Squad in 2018”.

Sarah went on to miss the cut by one shot, and yes, I was extremely disappointed, Sarah said.

I was really proud of myself for qualifying in the first place, that meant a lot to me and to do it in front

of my home club members and friends, gave me an incredible feeling of fulfilment.

To get so close was nerve raking, but extremely exciting at the same time.

I was four over at the turn and got that back to two over and missed a putt on eighteen that would have gotten me over the line, but not to be, but I am proud of my performance, Sarah went on to say.

What made Sarah’s Queensland Open performance that much more inspirational, was even after the disappointment of missing the cut, her first thoughts was to pick up her partners bag (Jack Thomson) to support him over the final two rounds, which resulted in a play-off between Jack and Anthony Quayle, where Anthony won on the first extra hole.

It was also great to witness the camaraderie and sportsmanship from our Invincibles members who missed the cut “like Sarah” pick up the bags of other competitors to help them over the final two days.

Leading into and during the Open there were so many incredible highlights and stimulating moments that certainly need a mention, because collectively they made for an inspirational and awe-inspiring Queensland Open.

Firstly, was witnessing Darrel Dalton’s (competition) promoting golf to all groups and individuals that may be marginalised and isolated by their intellectual or physical disability or socio-economic circumstance.

It was pure joy watching the fun, laughter and joy that Darrel and his team brought to the Q-Open, it was infectious!

It was also fantastic to be involved in the MyGolf Championship for non handicap players that incorporated nine holes off a Shorten Course Ambrose Championship and a putting and chipping competition that was won by Peregian Golf Course (p1 below).

There was an enormous amount of good luck weather wise. Particularly when you think that Pelican Waters was literally under water, just seven days from the opening round when the Sunshine Coast received their total average rainfall for February, in just two and a half hours (260mm) which was fantastic for our dams, but not so good for the organisers leading into a major championship.

Our hats go off to Andrew Kenny (Manager) who was seen out mowing the fairways on the Sunday to do everything in his power to make sure everything was in readiness.

Troy Muir (course superintendent) a miracle worker who worked day and night, against the odds with his incredible team to get their course up for the big occasion, and that they did, it was in excellent condition to host the Open.

They along with the whole team at Pelican, led by Dale Williamson (Golf Operations Manager) Michelle Hurd (Function & Events Manager) and Jimmy Van Den Bremer and their teams should be extremely proud of their efforts against the odds.

Another major highlight was witnessing Joyce, Chris Crabtree’s (Pelican Waters member) mother witnessing him play golf the first time, which was quite emotional and a proud moment for both Chris and his mother.

It was cool, Chris said, I was proud to have mum out there with me, it meant a lot to me.

After an enormous amount of hard work and sleepless nights from the PGA and Golf Australia, it all worked out in the end to the relief of all parties concerned.

Both Luke Bates (Golf Operations & State Senior Manager – Queensland) and Andrew Langford-Jones (Director of Tournaments, PGATA) and their teams were extremely happy with the outcome, with all that has unfolded over the past ten days, we really got lucky, the outcome was far better than we imagines just a week earlier.

You can pretty safely say that we are thrilled with the outcome and more than happy that we got through in one piece, it really was a team effort, one that we really did appreciate, Luke said.

All up, the Sunshine Coast turned it on as it always does, the course was in magnificent condition, the weather was perfect, the galleries turned out and the competitors really got the best of it.

The play-off was a fitting way to wind up proceeding as it certainly got everyone’s attention!

To view the full results and story at PGA Australia, please click on the following link: