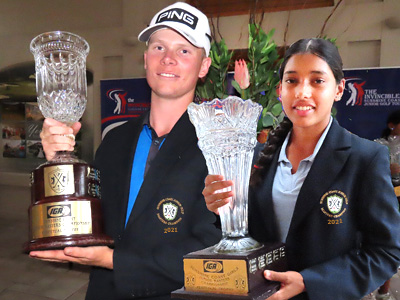 On what was another fantastic day for golf, a day that allowed the magnificently presented Noosa Springs Golf and Spa Resort to host an enthralling final days play in The Invincibles 2021 IGA Sunshine Coast Junior Masters Championship, where Ben Duncombe (Headland) and Manato Nakatani (Surfers Paradise) gave it……………..

Full results in both the Gross and Nett divisions can be found on The Invincibles App!

“After making comment earlier in the day that he (Ben) wasn’t going home without the title.”

I’ve been trying to win The Masters Championship for so many years, and kept coming up short, Ben said.

I was so nervous going into the play-off with Manato. He’s a brilliant player, and I knew I had to bring out my best if I was going to achieve by dream, which I did with a birdie on the second play-off hole after we both parred the first.

That was a huge relief, Ben said.

This really means a lot to me. I have been trying for this for so long.

I am over the moon, and I think this is going to take a little time to sink in, but I will savour the moment, Ben went on to say.

There were so many very talented players in the field, like Manato. He really is a champion player and a fierce competitor which makes my performance one that I will remember for a long time.

I was also quite concerned about Billy Dowling (Surfers Paradise) a plus five marker who plays a mean game himself.

The field was full of talent in both the boys’ and girls’ division which just goes to show the depth of talent in this year’s Invincibles Masters Championship. I think there were fifteen plus markers from twenty-two clubs, which is just incredible.

Talking about talent, the girl’s division showcased some magnificent performances, particularly from Shyla Singh (Southport) who was just one shot of the all-time course record at Noosa Springs (held by Invincibles member Jamie Dougan (Beaudesert – 7 under) when she came home to finish with combined rounds of 72-73-66-68=279.

Shyla was a bit disappointed on day three, even after recording her six under par 66. I made a bogie on the very gettable par five third hole, and an eagle putt that refused to drop.

I feel I left a couple of shots out there on day three, but I am so excited with the way I played here at The Invincibles IGA Masters Championship. They really have put on an amazing event, Shyla said.

I knew I was going to have to play my best golf given the strength of the field. I knew that Yuuki Takada (Southport) Kate McFarlane (Bundaberg) and Norika Wakayama (Royal Pines) and some other enormously talented girls weren’t going to make it easy for me, and that’s why I feel so proud of my performance, Shyla said.

Warren Ellis (Golf Director at Noosa Springs) was blown away with the results. I don’t believe I have witnessed scoring like that over the last two rounds of any championship held here at Noosa Springs, Warren said. And that includes amateur or professional championships.

The talent that’s on display when The Invincibles Tour comes to play is incredible and awe inspiring. They are a credit to the game.

Ten Under par over the last 36 holes, is incredible golf. These kids are taking the game to a whole new level and Noosa Springs is proud and are more than happy to support and help The Tour wherever and whenever possible.

The input and support  we receive from these men and their clubs is nothing short of phenomenal, which is something that I hope our juniors and their families don’t take for granted.

A big thank you to Alex Moore for his generous donation of prizes to both the nett winners.

Please keep an eye on The Invincibles website for the Newsletter and Gallery over the coming days.

If you haven’t already done so, please make sure you get your registration forms in for the IBF Junior Classic.

And the Headland Junior Classic, this Sunday the 3rd of October.