Porter & Duncan Take Up The Challenge At Keperra 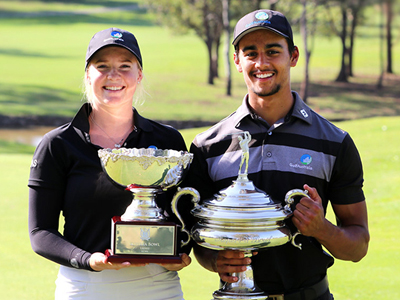 Past members and great supporters of The Invincibles Tour, Cassie Porter (Peregian) and Tyler Duncan (Redcliffe) will sleep well tonight after their outstanding performances in winning the 2021 Keperra Bowl, as will…………….

Last year’s champion and Invincibles members Justice Bosio (Caboolture) and Blaike Perkins (Pelican Waters) who put in brilliant performances of their own to finish runner-up.

Romantic partners Cassie Porter and Tyler Duncan completed a triumph for love at the prestigious Keperra Bowl in Queensland today.

Porter’s win in the women’s event was the climax of a stunning comeback from injury, and she was able to watch as Duncan took the men’s title with a par at the third playoff hole against Blaike Perkins.

The tournament was shortened to 54 holes because of storms on the second day. The 19-year-old Porter, who plays out of Peregian Golf Club on the Sunshine Coast, picked up four shots to par in the final four holes today on her way to a 67, the day’s low round.

At 10 under par, she won by two shots from last year’s winner, Justice Bosio.