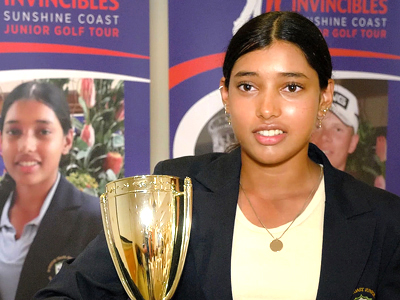 Quiet, unassuming Southport golfer Shyla Singh has been in incredible form over the past two months, but faced perhaps her toughest test on Sunday, playing off a handicap of +4 in The Invincibles Gold Cup of Cups, a tournament that rewards the best nett player. Usually…………..

Low markers don’t have much chance of winning nett events, but Shyla put that thought to rest when She did what most consider impossible, scoring a six-under-par 66 (70 nett) to take out the title for 2021.

“I was a little disappointed with today’s round,” she said. “I had bogeys on seven and eight, which was a bit annoying, but I did have eight birdies, so I really should be happy with that at the end of the day.

“My putting really has been my strength, which is fantastic, I am really enjoying my golf, and I love coming up from the Gold Coast to contest The Invincibles events. They are a lot of fun and they really do make you feel welcome.”

Her 66 in the third round was just one shot off the course record, set by another Invincibles member, Jaimee Dougan, back in 2011.

Shyla’s brilliant form didn’t stop there. A month later she headed to Twin Waters for the Ian Baker-Finch Junior Classic, and recorded another brilliant five-under-par 67 to win the IBF Classic.

Shyla’s last four rounds on The Invincibles Tour were 66, 68, 67 and 66, adding up to a world class 21 under par, something most pros can only dream of.

Warren Ellis, the experienced Director of Golf at Noosa Springs, said he had never witnessed a trainee or professional recording rounds like Shyla’s. Her performances were just incredible, Warren said.

“I really am proud of my results,” Shyla said. “They are by far the biggest wins I’ve had and I am really look forward to getting back on the Tour next year.”

The Newsletter for The Invincibles Presentation Dinner that was hosted by Noosa Springs, will be posted over the next few days.