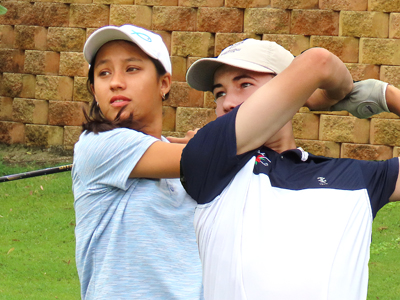 Despite some very ordinary weather conditions that caused a 30-minute delay, Ionna Muir (Maroochy River) and Anthony Mannion (Indooroopilly) shot solid rounds to win the inaugural Grant Field Junior Classic at Caloundra on Thursday. Where it was…………….

Obvious that everyone wanted to brush off the Christmas cobwebs and get back into action in the first Tour event of the New Year.

Ionna shot 75 and Anthony 73 to win the event, while organisers Grant Field and Craig Jansz were thrilled with the turnout.

“Next year, I would like to build this event into a major 54-hole championship hosted by Pelican Waters and Caloundra Golf Clubs,” Grant said.

“I feel that would be a great platform for our juniors to experience the longer version and championship conditions of the game.

”Ionna and Anthony (p1 and 2 below) both qualified for The Invincibles 2022 IGA Sunshine Coast Junior Masters Championship, which will be hosted by the generous and supportive Peregian and Twin Waters clubs, along with the Noosa Springs Golf & Spa Resort during the last week of the September school holidays (Sunday, September 25 to Wednesday September 28, 2022)".

Natasha Larard (Beerwah) won The Invincibles Sunshine Coast Course Cup with her 72 nett which qualified her for the Gold Cup of Cups Championship that will be hosted by the magnificently presented Noosa Springs Golf & Spa Resort on Sunday, November 20, followed immediately by The Invincibles Annual Junior Presentation Dinner.

On behalf of the organisers, The Invincibles Tour thanks the team at Caloundra, particularly Jason Looker (manager) for hosting another great event.

The Tour would also like to extend its thanks and appreciation to the team in the office, the ground staff, caterers, pro shop, and bar staff for not only putting on a wonderful day but, most importantly, for making everyone feel so welcome.

A major highlight of the day was seeing some of our past members, Charlie Dann, Shae Wools-Cobb and Jed Morgan, doing a training program under the guidance of Grant Field, even in the pelting rain.

Ziara Field (p4 above) also did a brilliant job taking photos throughout the day.

Other highlights included: Jackson Smith’s lengthy putt on nine to salvage par, Dean Sae-Ung’s four birdies in trying conditions, Sophie Thomsen’s birdie putt from off the green on nine, Julian Stavrou’s up and down from the bunker on nine to salvage par and Janie Carroll’s 95m approach to 10 for her birdie.

If you see or hear of anything special happening at one of our Invincibles events (or any event for that matter) please don’t sit on it, forward them through via text to Graeme (0417 783 848) so we can all enjoy the moment.